Islam means submission. It might be the most appropriate name for a religion. The word Hindu is derived from a river.

There might be something to the Muslim claim that eventually everyone is going to be a Muslim. If I am the final human incarnation of God, and humanity is to be on earth for thousands of years, maybe even 100,000, or even millions, then in the distant future the idea that God is in the beyond dimensions is going to be the most accurate.

All five talk about the same God. Is this a five blind men and the elephant scenario?

The Hindu has rejected Jesus for 2,000 years now. It was Jesus who gave them the Vedas.

Neither the Hindu nor the Jew tries to convert others to their religion. It is as if they want to keep God to themselves. It is a chosen people syndrome. But God is the God of all humanity.

The 10 commandments are meant for all humanity. They are like soccer rules. You should know the rules so well and obey them so well that you can then fully focus on the game and fully enjoy the game. The rules recede into the background as long as they are obeyed. The rules are not the game. But foul play messes up the game for all involved.

Honesty and hard work are put on equal pedestal. Honesty is the ground rules part. But hard work is the soccer game. God has endowed you with your own unique set of gifts. God created you and wants you to be happy. You become happy by making the fullest possible use of your God given talent. Application of that talent is hard work.

You could obey all the ground rules, but if you are idling then that is like you are refusing to even get on to the soccer field. Sloth is downright sin.

But hard work can be of many kinds. It is not always physical. And sometimes people doing cutting edge work can appear downright lazy, as Albert Einstein appeared to people around him when he was working on his theory of relativity at the patent office.

A lot of spiritual work is sitting still. For some people that is their calling, and they like to do it full time. That is a hyperactive kind of sitting still.

Hard work can not always be measured in monetary terms. A lot of creative work might be enormous effort with little or no pay.

Three of God's four human incarnations have been to do with earth, with the here and now. God wants you to live a full happy life on earth. Earth is not punishment. Having to earn everlasting life is a good thing. There human limitations are a boon. You are that much more dependent on God. Mastering free will is easy peezy cheesy when you love God.

That is why Jesus said it is harder for a rich person to go to heaven. A poor person might quite literally think their next meal is coming from God. That puts them at an advantage. A rich person might fall into the idolatry of worshipping physical things, might think he or she is self sufficient and spend little to no time thinking about God, might think they did it all themselves.

Jesus asked a rich person to walk away from his wealth and come walk with him. That is still the message to everyone whose net worth is above zero. You have to completely walk away from all your wealth and everything physical before you can truly pray, before you can truly worship. You momentarily have to lose it all. So you may feel God gives it to you, all of it, at the end of the prayer session.

God is not opposed to wealth, to prosperity, or a basic commandment would not be about respecting property rights. Thou shall not steal. What God is opposed to is idolatry. When you worship physical things you buy with money it's idolatry. Idolatry is sin. Your true net worth is how much you love God.

Is it possible to walk the path of God and stay true to God when you go in the opposite direction? When your net worth is above zero? Maybe even a lot above zero? But of course. If you can walk away from all your wealth and everything physical during your daily prayer, during your worship of God then, yes, it is possible.

There is talk of "true prosperity" in the Bible. That true prosperity can only be built on the bedrock of Universal Spiritual Centeredness, USC. What is Universal Spiritual Centeredness? It is 24/7 God consciousness on the part of every single human being out of free will. On that strong foundation true prosperity can be built, something to the tune of a 10,000 trillion dollar global economy before the year 2500. The phrase "true prosperity" comes with a number. It is a fairly big number. The most important ingredient is USC. Every human being is capable of it under all circumstances. 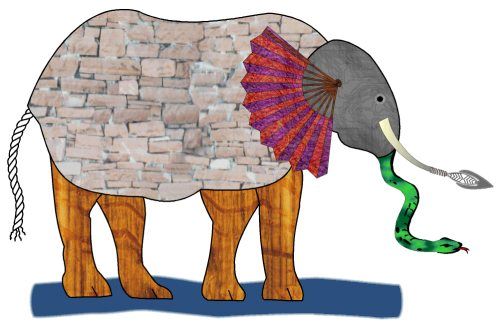 Posted by Paramendra Kumar Bhagat at 8:14 AM