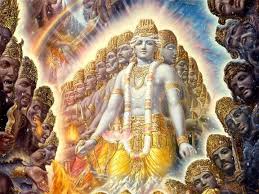 In the Geeta Lord Krishna states the age of the current heaven, which is not the first or the last heaven, is 100 billion years in earth time. If the physical universe is to last a few billion years then it would appear the physical universe has been created and destroyed about 20 times already while the heaven has continued to be. Jesus promised 2,000 years ago that he would come at the end of time to collect souls to take to heaven, not to worry.

But what happens when all heaven and all earth has to be destroyed at once? Lord Krishna says in the Geeta, at that moment I take you back into my womb. Like a wise man once said, God does not waste a single leaf, do you think He will waste a single soul?

That is such a ridiculous metaphor though. Weird things happen when you try to understand the 10th dimension through three dimensional metaphors. It doesn't work.

God is fundamentally incomprehensible. You do not figure out God the way you figure out gravity. God reveals. And the God of infinite love has revealed plenty.

God is the God of infinite love. That is true. When you try to pin it down and get specific it can get a little problematic.

Wisdom is a woman in the Old Testament. In the New Testament that Wisdom shows up as Jesus.

Jesus has called the church his body. He has also called it his bride. But then he routinely addressed people around him as "brothers and sisters." I have said all humanity is my younger sibling.

Lord Krishna was a baby to love for Yashodha Maiya, his mother. He was a boyfriend to Radha. He was a husband to Rukmini.

That is God saying, see, loving me is as easy as loving a toddler. Or as easy as loving a boyfriend. Lord Krishna was a human incarnation of God specific to women. What happened to Draupadi was but the tip of the iceberg. Women were a much mistreated lot in the land.

Because God is the God of infinite love he has placed himself in every imaginable human love form. That is God trying to be easily accessible.
Posted by Paramendra Kumar Bhagat at 9:56 AM