The Family, The State, The Person, The Group

Lord Rama, the first human incarnation of the Holy Father, created the family on earth. Lord Rama established justice is above knowledge, wealth and power, otherwise Ravana was the most learned man of his age, he knew the Vedas end to end, had enormous wealth and power. The Devil is perfectly capable of posing as a Brahmin, a priest. Ravana is an example. "I will know the tree by its fruits," Jesus said much later. Lord Rama also showed people of all castes were to be treated equally. Sita Maiya went for a second vanavaas, or forest dwelling, on her own to prove that point.

Americans know what the Ten Commandments are. It is written, honor your father and mother, stay true to your spouse. But obviously written clarity is not enough. If you truly want a great family, you have to worship Lord Rama; Rama and Sita.

The family is the basic social unit, it's not the church, not the temple. That message not taken to heart leads to societal breakdown. And that family love is still possible at net worth zero. Lord Rama was no prince in the jungle.

But you do need a strong, vibrant House Of Worship at the center of the community for families to cling on to. For it is love of God that makes family life possible in the first place. When you marry, you marry with God as your witness.

Lord Krishna is much loved and much misunderstood. Lord Krishna created the modern state. The family is important but not enough. You also need a state that will uphold justice. Lord Krishna established justice is above peace, but you do have to exhaust all peaceful options first. That message is as relevant as the family and is timeless.

Draupadi's mistreatment in the royal court has to be seen as the tip of the iceberg as to how mistreated the women of the era were. Love of God wards off evil. Fear itself fears God. The very idea behind a human incarnation of God is that God is being accessible to humanity. Otherwise God is too overwhelming to look at. No one has seen the Holy Father but the Holy Son, not even Arjuna. Arjuna was shown a much bigger form of God, but not the truest form, the one that exists when all heaven and all earth is destroyed. And Arjuna got scared. He begged Lord Krishna to come back into human form.

The Krishna avatar was primarily for women. See, you can love God as easily as you would love your toddler. It is that easy. And if you love then that keeps evil at bay. You can love God as if He were your boyfriend. That is the young Krishna. But once Krishna crossed the river He started a new phase of His life, the phase that created the modern state. He never then went back. He said to the gopinis, I do not wish to besmirch your memories of me. Finally Krishna saved Draupadi's honor. That is God saying to women, I am with you when no one else is there for you, if you care to call on me. Krishna is your own personal 911. Krishna is your ultimate pepper spray.

God takes great care to balance out the Rasa Lila phase. Kunti has children with a few different small g gods, without physical intercourse. Draupadi has five husbands, all brothers.

Sita picked her own husband. Lord Krishna emphasizes that point again and again. The woman herself should pick who she will marry.

And remember, this was 5,000 years ago, before a single word of the Bible was written.

In short, Lord Krishna does not contradict Lord Rama's message, but sometimes that can be hard to understand. Look at the enormous male monopoly of religions even today and you will realize why God decided it was important women realized it was easy to love God, and one incarnation was just for them. You have the baby Krishna, you have the young Krishna. You have Krishna who is Draupadi's 911, not your son, not your boyfriend, not your husband, but still all yours in your hour of need.

Jesus presented himself as a sibling to his disciples. "Brothers and Sisters," he said. He called the church his body, but also his bride. God is the God of infinite love. That is why He has used the metaphor of every possible form of human love.

"I am both the offering and the offered," says Lord Krishna.

Jesus created the person on earth. And this is something measurable, tangible, concrete. In communities across the world where Jesus has not been accepted yet you will come across people who keep falling back into group identities of one form or another. The individual does not exist.

Jesus was the ceasefire. Jesus was God bringing an age to an end. He was born into a world of mindless violence. He said, peace.

Today the mindless violence is at the level of group identities. We call it racism and sexism and a few other isms. There is enormous emotional violence going on. I am here to call a ceasefire. I say, peace. I am the cure to racism. I am the cure to sexism. I ask for a fundamental change of heart and conduct to herald a new age. I am king to all earth, and I will punish if necessary.

The "true prosperity" I promise you is only possible in that new age.

The cure to racism has been right in front of you for thousands of years and yet it has taken a second coming of Christ to connect the dots. This mahamantra is the cure.

"True prosperity" that was promised to you thousands of years ago is that I look at America today and I see a Third World country.

I am the cure.

If I created the person, and if now I will create the group, is that not a contradiction? A group that does not have individual persons inside it is no group at all. There is no contradiction. Lord Krishna did not contradict Lord Rama. Only a strong, loved, respected woman can form the family that Lord Rama created.

Jesus went up the cross, and broke Mother Mary's heart into a million pieces. The mother's sacrifice was not any less. That is why she is worshiped alongside of him.

Know that I am God. 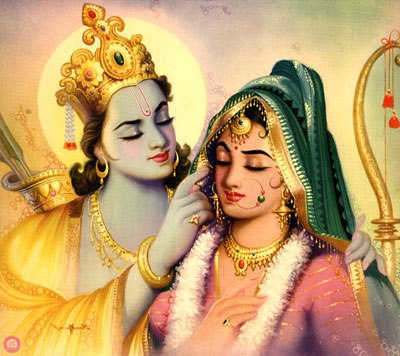 Posted by Paramendra Kumar Bhagat at 9:26 AM