You Do Have Free Will 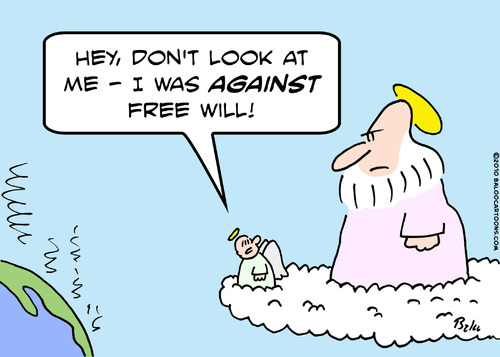 For example, if God cares so much for right conduct, and if He is omnipotent, why did He not make us such that we would not make mistakes? In short, why are we human beings? Why are we not robots?

God did create a physical world that obeys the laws of physics robotically. But thanks for the thought.

The thing about free will is, it is the very pinnacle of God's creation. That free will is what makes you a being who God will take back into His womb when He finally destroys all heaven and earth.

God created you in His own image. What does that mean? The number one thing that means is, just like God can love you are also capable of loving. That capacity for love comes from having free will.

Then people see God can read time seemingly perfectly. God described the crucifixion of Jesus hundreds of years before the Romans even adopted crucifixion as a method of execution. Some people draw the wrong conclusion from that. They say everything has already been decided beforehand. What's the point in trying? Fatalism creeps in.

If everything has already been decided beforehand then you have no free will. You are indeed robots that you wish you were.

But that is not the case. You very much have free will, as do the holy angels of heaven.

A few weeks, a few months ago the Holy Father sent me a few short telegrams. One said, "Remain Calm." Another said, "Don't Panic." I was not even aware I was uncalm. But I guess I was. If the infallible God says so.

After a while I figured out the best possible course of action. I decided to turn the tables on Him.

I got down on my knees and said, "Holy Father, my Father in Heaven, please give me the strength and the wisdom and the fortitude to remain calm, to not panic." And He gave it to me with immediate effect.

You might want to try that. But you do have to enter into a personal covenant with Him. At your end you have to honor his basic rules, also known as the Ten Commandments, otherwise He is not going to listen. And then throw all your burdens on Him.

You have little power. He has total power. Let Him carry all your burdens. He is your True Father. He is the Father to every human being.

You do have free will. You do right by your free will by obeying God's basic rules. Then you throw all your burdens onto His big, big shoulders.

Insider tip: He likes it that way.

Posted by Paramendra Kumar Bhagat at 10:39 AM