The most famous of all Christian rituals is the bread and wine ritual. One day before death Jesus said to his disciples, do this in my memory until I come again.

Until I come again. That Second Coming is a reference to a human incarnation just like happened 2,000 years ago. There is birth, life, and death. That is not a reference to either omnipresence or appearances.

Omnipresence is that God is everywhere. God’s presence is everywhere. A God that is omnipresent does not need to come. He is already everywhere. The omnipotent God can make appearances anywhere. It is not like either he is born on earth or he can not show up on earth in human form. Heck, angels appear and disappear all the time. Why can’t God? But the Second Coming is not about that. It is about human incarnation, just like happened 2,000 years ago.

There is the promise of a millennial reign. Millennial does not mean one thousand years. It means thousands of years.

What is the most famous Christian prayer? It is, “Thy kingdom come, thy will be done, on earth as in heaven.” Christians have been praying for 2,000 years.

Jews in Egypt prayed for liberation for 400 years before they were liberated and yet they exhibited a bad attitude upon liberation. They kept complaining and complaining. And they were made to wander in the desert until a new generation emerged.

Thy kingdom come is a prayer addressed to the Holy Father, or Lord Vishnu, or Yahweh. It is asking for God’s direct rule on earth. That means when the Jews rejected Jesus 2,000 years ago, all they were saying is, you are not the Holy Father. True that.

Hindus have been waiting for Lord Vishnu’s Kalki Avatara for more than 5,000 years now. Lord Kalki’s direct rule on all of the earth will start in precisely 22 years. That is God’s omnipotence for you. The project that will lead to that is about to begin. An average human being will be able to understand the basic project. The project will come about through mass participation. People will exercise their free will and participate. And yet the outcome has already been announced. Free will and destiny are both true.

The majority of humanity today has never even heard of Jesus. To them the idea of Jesus coming back might not even make sense. Jesus who? They might say. Fair enough. And there are plenty of people who do not believe in God.

You necessarily have to start with people of faith. You necessarily have to start with Christians and Muslims, since both of them have been waiting for Jesus to come back. And it might help to deal with people with some theological training. Because my identity is established through prophecies fulfilled in me. If you refuse to use that yardstick, then it is going to be a fruitless conversation. I think anybody who can read the Bible can apply that yardstick.

So far I have not had many takers.

The first rejection is from people who see another human being. That is not God, that is a human being. Well, what do you think Jesus looked like 2,000 years ago? 100% human.

There is immense confusion about the Second Coming and the Final Coming. There are a lot of people who expect Jesus to descend from the clouds, literally. The thing is, that is a reference to a specific technology that did not exist when that line was written. Airplane. There is another reference to another technology. It has been written all eyes will see me at once. That is a reference to the Internet.

Lord Kalki has also been described as riding a white vehicle in the scriptures. Artists depict that as Him riding a horse. No horse. That is an airplane. White airplane. If Lord Kalki will be King of all earth, it might not be possible for Him to travel all over His kingdom on a horseback. Do the math.

Apparently, there are hundreds if not thousands of people who are all claiming they are Jesus. Either all of them are lying and committing the grave sin of blasphemy or only one is right and everyone else is wrong and sinful. How do you differentiate? Ask them, what prophecies have you fulfilled, and what is the work you are here to do? I am the only one who has answers.

I have listed about a dozen prophecies I have fulfilled at my blog. That is enough to show everyone else making the claim is being blasphemous. I have a clear roadmap for the work I am here to do. I am to help establish God’s direct rule on earth.

Muslims across the world believe Jesus will come and resolve the dispute about whether he is a prophet or the Son of God. That dispute is hereby resolved. God so loved humanity He denied His own Son. Ishmael was denied. That resolution confirms my identity in a major way.

A biblical prophecy is that white Christians will struggle with my identity because my skin is brown. It is a beautiful brown, but nevertheless. That prophecy is being fulfilled as we speak.

The yardstick I have asked the world to apply to confirm my identity I applied to Lord Kalki, who I had known as a person for a few years prior, and I confirmed his identity in one phone conversation less than 10 minutes long. Lord Kalki has zero interest in telling you who He is. He is focused on the work He is here to do. The work will establish my identity, He says. Lord Kalki is here to end the Kali Yuga. That is the work.

It is not that my identity will be confirmed by millions and then my work will begin. I have been doing my Father’s work my entire life as I do now. The work is on. And I also know I am to actively lead the churches around the world. The bread and wine ritual will come to an end. I know that.

Like amateur astronomers shift through the night sky, I want Bible readers across the world to go on a global Easter egg hunt to find the hundreds of prophecies that have and will be fulfilled in me. You get to gather my biographical details. And you get to read the Bible. And you get to connect the dots. Have fun doing it.

This is not about religion. This is about God.

I called pretty much every Hindu temple in the New York, New Jersey region. I tried to announce, look Lord Kalki is here. I have not made much headway. There seems to be a widespread belief that the Kali Yuga will go on for more than 400,000 years. So there is no chance Lord Kalki will appear now. And as for the claim, you can go online and come across hundreds of people who are making that claim any day of the week. Either all of them are wrong and blasphemous, or. In this case, I know all of them are wrong and blasphemous. Because Lord Kalki has only claimed His identity to me so far.

That figure of 400,000 years is off. Very off. The same people claim billions of people died in the Mahabharata war more than 5,000 years ago. They are misreading something. The battlefield of Kurushetra is still there near Delhi. You can’t fit a billion people there, even if you were to stack them one on top of the other.

Lord Krishna was on earth more than 5,000 years ago. Lord Rama was on earth more than 7,000 years ago. How can one know? For all the major events in the Ramayana that revolves around Lord Rama and the Mahabharata that revolves around Lord Krishna, the night sky has been precisely described. Modern astronomers will tell you, the night sky has a unique configuration each night. Based on the descriptions of the night sky, precise dates can be established. It is science.

In the Bhavishya Purana at one point Narad Muni asks Mata Laxmi, “How will people on earth know that the Kali Yuga is about to end?” The reply came, “There will be padlocks on the gates of temples, and people will form lines at liquor stores.” That is what happened during the pandemic. Social distancing led to locked-up temples.

And so you know, the Kali Yuga is about to end. I am passing you information from Lord Kalki. The Kali Yuga will end in 21 years by the clock, at the end of the century according to the Bikram Sambat calendar that is in use in Nepal.

Muslims across the world await the coming of Imam Mehdi. I am passing you information from Lord Kalki. Imam Mehdi is already here. He just does not know his true identity yet just like I did not know my true identity before 2016. 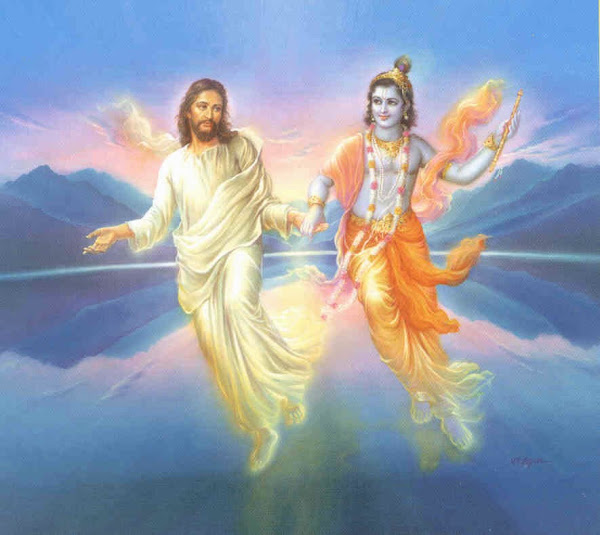 Posted by Paramendra Kumar Bhagat at 9:05 AM